Today the modeling of GC retention is confined to G=H-TS Gibbs type equations. From a practical point of view, which is common in the chromatographic lab, column polarity or boiling point cannot be described by this Gibbs equation. Vapor liquid equilibria apply much better to gas chromatography. However, polymer phases have infinite molar mass so molar mass is not defined, impairing application of Henry’s law to GC. Hence thermodynamic theory of GC has continued to model GC as if it were a steam engine. In this blog Vapor-Liquid Equilibrium theory will be applied to GLC. The polymer problem is solvable, but that problem will not be solved here… 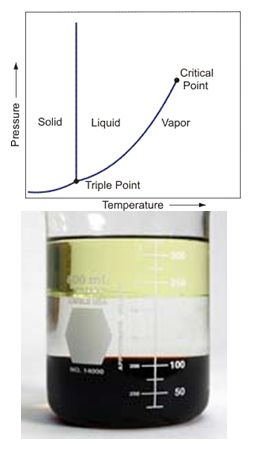 Pure liquid vapor pressure Pi is the boundary between the liquid phase and gas phase. Traditionally, Pi is calculated using the van der Waals Equation Of State using the critical point. Another equation is the Antoine equation. Both EOS and Antoine apply 3 or 4 parameters that are fitted on measured values. Most Pi measurements were performed before 1947 [2].
Mixing behavior of a component i in stationary phase L is accounted for by the activity coefficient γiL, a measure of stationary phase repulsion of molecule i. This property is referred to as column polarity or column selectivity by chromatographers. A rule of thumb is that stationary phase polarity and analyte polarity should match² . The challenge to understand mixing and demixing from polarity alone may become clear looking at a beaker with a 3 layer system. When stirred, an emulsion forms, but when allowed to settle these layers return, densest at the bottom. Demixing is caused by elevated values of the activity coefficient.
Henry’s law description of the partition of an analyte i over the gas phase and liquid phase is the ratio of mole fractions in the vapor phase (γi) and the liquid phase (xi):

This law applies to carrier gases below 30 bar. Molar volume is out of fashion today but between 1900 and 1940 it was a popular concept. Liquid molar volume V L, used today in activity coefficient equations, is defined with molar mass M L and density ρL :

Phase ratio β is independent of column length L. Temperature may change β in case of different thermal expansion of fused silica to change dc and the stationary phase polymer to change df . However, β is always assumed to be temperature independent.

Peak retention time then follows from equilibrium partition over gas phase and liquid phase of molecules in a capillary.

Unknown properties are: component i activity coefficient in stationary phase γiL and polymer molar volume V L. Packed column retention volume has been used from the onset of liquid chromatography by Tswett[1]. Net retention volume ViG0 is retention ti per gram mL of stationary phase and involves flow measured with a bubble flow meter at temperature Tatm and pressure Patm of the lab [3]:

Outlet gas flow is corrected to average flow F̄ by the James and Martin j relation:

Summarizing, we have for capillary GC:

And for packed column GC:

Where the equilibrium “constant” depends on temperature and stationary phase:

In hindsight, VoG never became the standard and the packed column technology only occupies one page in Vapor-Liquid Equilibrium modeling of today (see Flory Huggins [1]).

Equilibrium constant KiL relates component i concentrations in liquid and gas (CiG = KiLCiL). Some researchers considered this to be Henry’s law.

Activity coefficient γiL of component i in stationary phase L is the only unknown property.

Molar mass is infinite for polymers, but packed columns may have a well defined M L.

Retention volume relations to Vapor-Liquid Equilibrium (VLE) thermodynamics have been researched since the 60’s. Introduction of standard pressure and the standard temperature of 0°C to retention volume caused non-standard, undocumented features leading to confusion and ambivalent values. Critique [5] on these pressure and temperature corrections is that they led to incomparable numbers for similar GLC analyses. Finally, this research went out of fashion [5] in the 80’s.

[4] A.Kwantes and G.W.A Rijnders (1958) The determination of activity coefficients at infinite dilution by gas-liquid chromatography

¹Which is the equality of liquid and gas fugacity (fiG = fiL).
²In case of analysis of green gasoline this rule cannot be obeyed because Ethanol is mixed with Hydrocarbons.
³Indirectly supported by the Poynting factor [1].
4Liquids have little volume variation with pressure or temperature compared to gases, so for gas chromatography retention volume is not very practical…