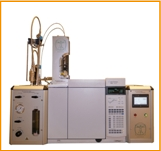 We are very excited to be able to offer this innovative new product to our customers. At the 2010 GCC the Liquefied Gas Injector was awarded “Best New Technology”. The injector is able to inject gases in liquid phase under high pressure directly on-column. The on-column injection allows analysis of high boiling oily residues in LPG using a GC method. The GC method is currently a work item of ASTM D02.H0 on Liquefied Petroleum Gas: WK31249 Residues in Liquefied Petroleum (LP) Gases by Gas Chromatography with Liquid, On-Column Injection. The GC method will be balloted in the fall of 2011.

A paper will also be presented by our Da Vinci Europe colleagues: “Improving Analytical Precision of Contaminants in Liquefied Gases (ie: oily residue in LPG and pTBC in Butadiene)”. This presentation will focus on the high boiling or reactive components in light matrices that are an analytical challenge. Injection techniques which are designed to ensure representative sample matrix introduction may not be optimal for heavier high boiling components. A compromise between low temperature for the % level ” lights” and high temperature for the ppm level “heavies” can promote adsorption, discrimination or fractionation which are common phenomena seen when using liquid sampling valves or vaporizers. Da Vinci will show two applications of the LGI. The first application determines high boiling contaminants in LPG at mg/kg level according to Proposed WK31249. The second application analyzes para-tert-Butylcatechol in 1,3-butadiene. These two applications are compared with conventional ASTM methods for determining residue contaminants in liquefied gases.

More information about the Da Vinci Europe LGI is available on our website:

Click here to view information about the application: Oily Residues in LPG